Call for a free assessment

The senate economics committee is in the midst of an enquiry into proposed changes to the R&D Tax Incentive with their findings due on 30 April 2020. Whilst we await their report, we took a look at the past to assess how the program has changed over time.

The R&D Tax Incentive is the federal government’s key program for assisting for companies undertaking research and development activities in Australia. The R&D Tax Concession, as it was then known, was first introduced in 1985 and allowed companies to claim 150 per cent of the cost of R&D as an expense against taxable income. Since its inception, the scheme has undergone a number of reforms.

In fact, over the past 25 years there have been a number of reviews into R&D Tax Concession/Incentive programs to assess and measure their success. As a result, substantive changes to the rules of the R&D Tax Incentive have occurred around every five out of the past 25 years.

The table below summarises the R&D benefit over the years. Prior to 2010 the same rate applied to all eligible businesses, irrespective of turnover. From 2010-11 onwards this was changed to provided targeted incentives to businesses depending the extent of their turnover. This is a trend that has continued, but with changes to both the R&D rates and the corporate tax rates, this has meant that in any given year there are a number of factors that can determine what benefit a company is entitled to; creating a level of confusion and uncertainty. 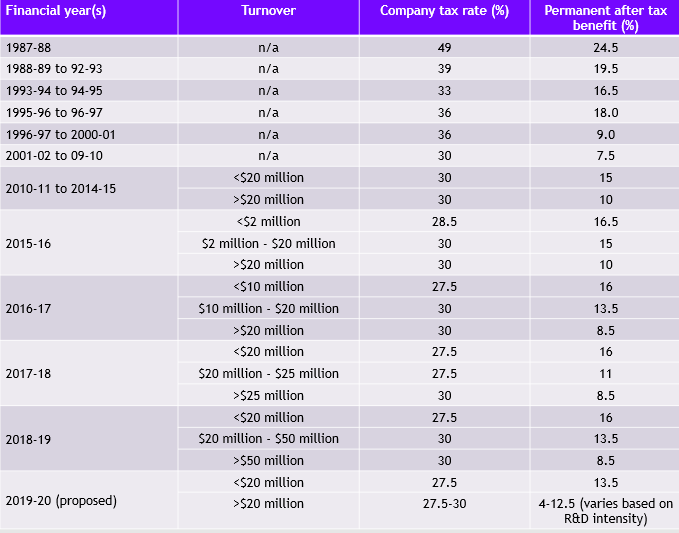 The ongoing tinkering with the R&D tax incentive continues to create uncertainty, particularly where incentives are weakened rather than strengthened. Whatever happens to the current Bill under review, we have no doubt that based on past performance it won’t be long before this Government, or a new one, has another crack at “fixing” the program.

We will continue to keep you updated.

GrantReady is a well-established team with a long history of successfully assisting companies access the R&D Tax Incentive.